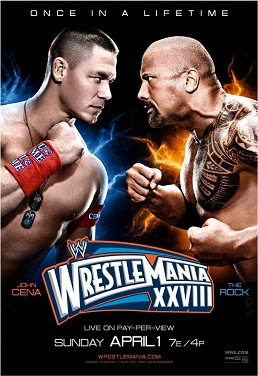 Well its been another year and we got another Wrestlemania in the books. So what are my thoughts? Well lets just dive right in and find out.

Never saw it. Although I would of liked The Usos to get the win I don't really mind that Primo & Epico won though I'm all for long title runs as I feel it help give a title more prestige and credibility and lets face it the Tag titles need that more then any other title in WWE save for the Divas title.

This was easily the biggest let down of the night. We just as well say that Bryan vs. Sheamus has been bumped off the card for the second year in a row. Although I rooted for Bryan I didn't mind that Sheamus won and figured as much that it would happen the only thing that pissed me off is that we were robbed of what could of been a potential show stealer.

Three matches in and the stink of disappointment is in the air at this years Wrestlemania yet again with this match. Cody Rhodes is awesome in every way and it really sucks that he dropped the title to The Big Show here. Cody was great in the match and Show was his usual self which isn't necessarily a bad thing. The match was pretty much as good as I thought it would be but the ending was a big disappointment.

Once again we get another throwaway divas match just because we need a divas match. It was no more or less offensive then any other one out there aside from the awkward finish. For the most part I'm no fan of celebrities coming in at Wrestlemania and getting the spotlight and here is no different but I will say that at least Menounos seems to be an actual fan of WWE and gave it her all bad ribs or not I can't help but respect that. That said though I would of rather this be singles match for the Divas title with Beth defending against a worthy opponent such as Kharma and if shes not ready to come back there is nothing wrong with Natalya taking that spot, at least then we could of had a good match.

It took our fifth match but finally we got one that was great. There was a fantastic story told in this match between the three men who have stolen the show at the last three Wrestlemanias and here in this match we finally got the ending that pulled on the heartstrings and had everyone at the end of their seat. The image of all three men standing together on stage after the match is what wrestling is all about. Oh yeah and The Undertaker going 20-0 is also great but we all knew that was going to happen anyways.

Despite there being no way that this match could of followed the one before it we still got a pretty decent clusterfuck of a match that allowed everyone who should of been on the card to get there and have a Wrestlemania pay day. Team Johnny winning was the only outcome that I wanted to see here despite what anyone says I love John Laurinaitis the guy is a goofball but it works in his favor very well. The only thing I never understood about this match is how could Laurinaitis, a man who was only interim general manager of Raw, a title that plainly states that he is only the general manager until they can find a suitable replacement, go from that to GM of both shows or even be qualified for it? Ah well I guess we all know that wrestling logic doesn't need to make any sense.

This match lived up to all the hype around it and more. Easily the best technical match on the card. I really have nothing more to add to it then the fact that both of these guys went out there and showed why they are indeed the best in the world.

After all of this we get Brodus Clay come out with his Momma and her bingo club eating up and wasting time that should of belonged to the Daniel Bryan and Sheamus match. WWE really needs to get the ball rolling on The Funkasaurs again. He was great at first but all he does is wrestle one meaningless squash match after another and they have made me not care about him really quick. This only made that feeling grow.

Machine Gun Kelly & Flo Rida sing John Cena and The Rock to the ring but not really:

Ok now I'm pissed off. Fist that stupid Brodus Clay segment went on over five minutes now we get ten minutes of singing from these bums. Stuff like this at Wrestlemania always pisses me off epically when it was time that could of went to Bryan and Sheamus. Instead we get Machine Gun Kelly and his group who all desperately need to eat a Big Mac so they don't look like they are sick and dying sing a stupid song followed by Cena coming to the ring and they we get Flo "its not Florida" Rida eating up another load of time singing his stupid song before The Rock comes to the ring. I thought these people were supposed to sing Cena and The Rock to the ring? What happened there? They just sang their own crap songs and then Cena and Rock came out to their usual entrance themes. I am so pissed off about the Bryan Sheamus match going 18 seconds at this point.

After twenty wasted minutes that could of went to Daniel Bryan and Sheamus we finally get that match that has been built and hyped up for an entire year. What can I say after that much hype and build up there was no way that the match could of lived up to its HUGE expectations. Don't get me wrong it was a good match, but it wasn't great which is watch this match should of been. As far as I'm concerned this will go down as a epic feud with a good match to top it off. Not a great one. Shame. The biggest suprise that that The Rock won the match. Sure I like The Rock more then Cena but this just seemed like a stupid move to me. Why let the guy who is there day in and day out for your company do the job when it would of benefited him so much more to get the win. As far as I'm concerned this match was a must win for Cena. The Rock didn't need this win since he'll be back in Hollywood again in no time.


Overall Wrestlemania was worth the price of admision alone for The Undertaker vs. Triple H match which was the show stealer again this year with Punk and Jericho following very closely behind. Its hard to even compare those two since they are two completely different types of match. As I said Rock vs. Cena was good but not great like it needed to be and in my opinion the wrong man won. The rest of the card was about what could be expected aside from the Daniel Bryan and Sheamus match which is something I will always hate.