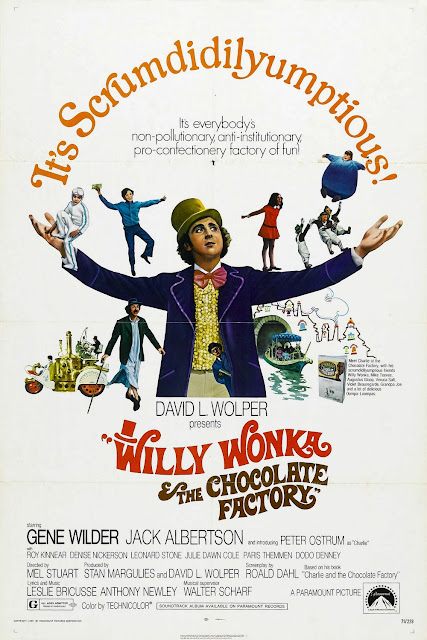 What can be said about Willy Wonka & The Chocolate Factory that hasn't already been said a thousand times before? This movie is after all an absolute classic.

We all know what the story is about. Some bum kid buys a chocolate bar that has a golden ticket within the wrapper that wins him and five other kids a lifetime supply of chocolate, a meeting with the mysterious Willy Wonka and a tour of his candy factory. Charlie is the only good kid and at the end of the movie Wonka rewards his kindness by giving him the chocolate factory.

Gene Wilder is absolutely brilliant in this movie which only helps cement him as one of the greatest comedic performers of all time. Anyone who would still argue after watching this movie could also be directed to a couple of Mel Brooks movies. Wilder's delivery in this movie is perfect every time weather he is being funny, genuine, annoyed, crazy or down right creepy.

As far as what I can say that hasn't been said about this movie before? Well I don't know if its been said or not since it seems pretty obvious to me so I'll just go ahead and say it. Willy Wonka & The Chocolate Factory is a slasher movie aimed towards children and not only that but Willy Wonka & The CHocolate Factory gave birth to the entire slasher genre. Yup you read that right. Willy Wonka is to children what Michael Myers, Jason Vorhees, Freddy Kruger, Leatherface or any slasher icon is to adults. Here's why.

As is the case with most slasher movies a group of kids are lured into a dangerous place and one by one each kid is picked off due to their biggest character flaw. One by one each the group of kids are narrowed down as Willy Wonka's cronies those creepy little Oompa Loompa's take them away singing about the fallen child in pure glee while their cruel master Willy Wonka watches on in approval. Soon there is only one child left, Charlie, but that wasn't for lack of trying since Charlie and his grandfather narrowly avoided being slashed to bits by a giant ceiling fan.

Having survived his deadly game in his house of horrors Willy Wonka rewards Charlie with the entire chocolate factory. This might seem like a kind gesture but it is actually Wonka's final ironic revenge. Charlie is a child so poor he could only afford to purchase two or three chocolate bars throughout the entire golden ticket madness but now had access to all the chocolate and candy in the world so you can be sure that at some point this poor kid will develop diabetes. That Willy Wonka is clever if nothing else.

They "kill" one bad kid at a time until only the good one is left formula was quickly adopted by horror and the the slasher genre was born. Most people point to The Texas Chainsaw Massacre or Halloween for starting the slasher boom but Willy Wonka & The Chocolate factory predated both of those to invent the slasher genre.

To go with all the horror this movie also has one of the most genuinely frightening scenes in the history of film. I am of course talking about the boat ride. Everything starts off good enough with Wonka reciting a fun little poem but it soon all goes to hell. The boat speeds up, crazy images of insects crawling over peoples faces and chickens getting their heads chopped off are projected on the walls and Wonka begins to scream. He is no longer singing a fun little song as much as he is screaming at the top of his lungs. It was a scene so frighting that it was sometimes edited out of the TV version! Not bad for a "kids" movie right? Just to refresh yourself here's the dubious scene in question:

Despite all the horror of this movie its still fun film for the whole family. The songs are fun and easy to sing along with and it carries a good message. Be good little boy or girl or Willy Wonka will lure you into his chocolate factory of death where the Oompa Loompa's will surely pick the child's bones after Wonka is done with them. I give this fun family classic a 8 out of 10! 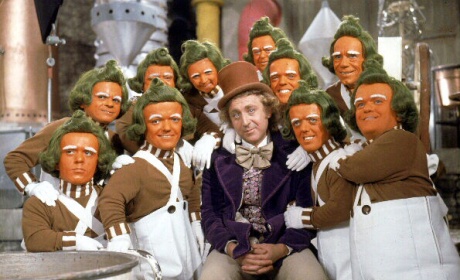