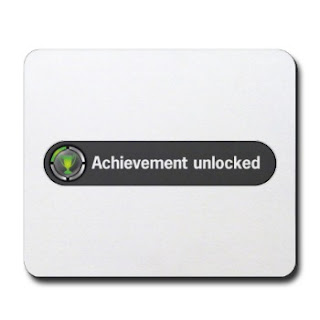 The other day while at EB games where I was pre-ordering Mass Effect 3 for my younger brother I couldn't help but overhear two gamers, one the store clerk the other a customer, have a very polite argument/debate on which was better The X-Box 360's achievements or Playstation's trophies.

This talk was quite humorous for no other reason then both guys really sucked at the art of argument. One would say one point on why trophies were better and the the other would turn that around and use that exact same point as to why achievements were better then trophies and so forth. I listened to this for only a few minutes but got much joy out of it before getting bored of it. Basically it came down to one saying Gamerscore was more prestigious then trophies because it was an actual number and the other saying that trophies were more prestigious because it was done in levels like say an RPG.

Anyways I found this entertaining because for all intents and purposes they are the exact same thing. The only difference is a few words. Achievements, trophies, gamerscore, levels is a five or ten point achievements better then a bronze and silver trophies. Its all the same.

One of the arguments was that trophies were nothing but Sony's attempt to make a cheap rip off of Microsoft's achievements. Yeah I'd say that is a pretty accurate guess. Sony saw that gamers were going mad for the achievements because it was a way to prove their skill in any one particular game and thus gamers were buying X-Box 360's games and playing them more. Why wouldn't Sony want to cash in on that? Trophies are rip-offs? Sure but whats not a rip off these days? If something is popular naturally someone else, the main competition epically, are going to go out of their way of do something similar to compete. As far as I'm concerned its only a matter of time before Nintendo introduces their own version of achievements/trophies, the only question is what are they going to call them? Badges maybe?

So which one is better? Which do I prefer? Well the second question is easy, I prefer trophies but I also own a PS3 and not a 360, of course I'm going to side with trophies. But which is better? Well I guess that will always be up for debate for gamers everywhere personally I don't think one is better then the other, they are the same, if you buy the same game on the 360 and the PS3 the achevement and trophies lists are identical, the only difference is what is next to the title of the reward? A point total or a trophy color.

At the end of the day its all the same thing and comes down to just one thing for every gamer out there. Bragging rights.


So where do you fall on this subject? Achievements, trophies, both or neither? Let your opinion be known below on the Yak Backs.